HEMINGWAY: HERO IN FOSSALTA DI PIAVE
In July 1918, by the current headquarters of the DE STEFANI winery, Ernest Hemingway was recovered after being seriously wounded during First World War.

In 1918 when United States of America entered First World War, Ernest Hemingway left his home to come to Europe to join the military troops.
At one in the night between the 8th and the 9th of July, the not yet nineteen years old Ernest Hemingway, disobeying precise orders, went up to an observatory point full of Italian machine-guns, called "Buso de Burato", because he wanted to bring cigarettes and chocolate to Italian soldiers. Suddenly he was seriously wounded at his legs by fragments from an Austrian mortar which exploded near there. Despite his wounds, and under a continuous fire, he was able to carry on his shoulder an injured soldier and he saved him. He received a Silver Medal from the Italian Government for this.
Afterwards Hemingway, who was seriously injured and fainted, was carried in the mayor house, which was later evacuated because it was attacked by the Austrians. Then he was brought in an already bombarded house, right where the DE STEFANI winery is today. There he spent the whole night and his wounds were so painful that for the first time he thought of committing suicide. Afterwards we passed many hospitals up to his final arrival to United States of America to be definitely treated.
The relationship between Hemingway and Fossalta di Piave will then be immortalized in two works. In 1929 with "A farewell to arms" he told with careful precision and highly dramatic effect of the Great War in Italy. Then in 1950 with "Across the river and into the trees" he got inspiration by the marvellous Venetian environment.

REFRONTOLO PASSITO MARZEMINO: THE WINE OF MOZART
Since one century ago in Refrontolo, a small village located north of Venice, in the heart of the hills covered by vineyards from Conegliano to Valdobbiadene, the De Stefani family produces the Refrontolo Passito, which was also mentioned by Mozart in his opera "Don Giovanni".

The Refrontolo Passito is a wine produced in a very limited quantity from Marzemino grapes, native variety of this area. It has been produced since 1400 and even today the production technique is still the same as centuries ago. The grapes, carefully selected during harvest, are then naturally and slowly dried in order to raise its features. During this stage water evaporates and components of the berries deeply evolve, improving quality and intensity of the aroma. Traditionally the Refrontolo Passito was the wine for special occasions and then was tasted during important events and happy anniversaries.
The Refrontolo Passito was also mentioned by Wolfgang Amadeus Mozart in his opera "Don Giovanni" in 1787: "versa il vino, eccellente Marzimino!" (pour the wine, excellent Marzimino!).
As a matter of fact the fame of the Marzemino from Refrontolo is due to Lorenzo Da Ponte, author of the book then played by the genius from Salzburg. In fact he was from Ceneda, the current Vittorio Veneto, a town just a few kilometres from Refrontolo. In September 1787 Da Ponte brought Mozart the Refrontolo Passito when they met at "The three lions Inn" in Prague, where they composed the opera.
Today the Marzemino from Refrontolo, after having obtained in 1993 the D.O.C. "Denomination of Controlled Origin", is a sweet red wine, with a very high concentration and an intense wild fruit bouquet. It improves after ageing in bottle and, also during the period of Mozart, it could well tolerate long journeys. It is marvellous with fruit cakes, chocolate, seasoned cheeses, but it is also superb as a meditation wine.
In order to keep a memory of the tight link between Mozart and the Refrontolo Passito, in the square in front of the city hall of Refrontolo there is a monument which was unveiled in spring of 1984. It represents with an incredible reality a vine, a violin, Da Ponte, Mozart and a bucolic young lady.

THE VENETIANS IN THE "TERRE NOBILI"
Our wine "Terre Nobili" recalls a very important period for the land around the river Piave, mainly due to the wide development of viticulture that the Venetians aimed at.

Until the middle of the XX century the river Piave, that once flowed in the lagoon of Venice, and the small canal Fossetta were important ways for river shipping.
Thanks to the noble Venetian people and to their richness, in the area around the river Piave the first Italian specialized vineyards were planted. This new way of making viticulture and oenology gave a deep impulse to development of culture and art of wine making in Italy.
Not only did the Venetians sailed the river Piave to go to spend holidays in their luxury Venetian villas, but they also visited the vineyards and wineries in order to buy their superb wines. Among the destinations of their journeys there also was Fossalta di Piave, a small village linked directly to Venice through the small canal Fossetta. The Venetians used to taste several wines, choose the best ones and purchased entire lots, that then were delivered to Venice in oak casks via the small canal Fossetta. Then this land was a pleasant destination of the noble Venetians searching for excellent wines. On this old tradition our wine TERRE NOBILI, which means "noble land", finds its essence.

END_OF_DOCUMENT_TOKEN_TO_BE_REPLACED 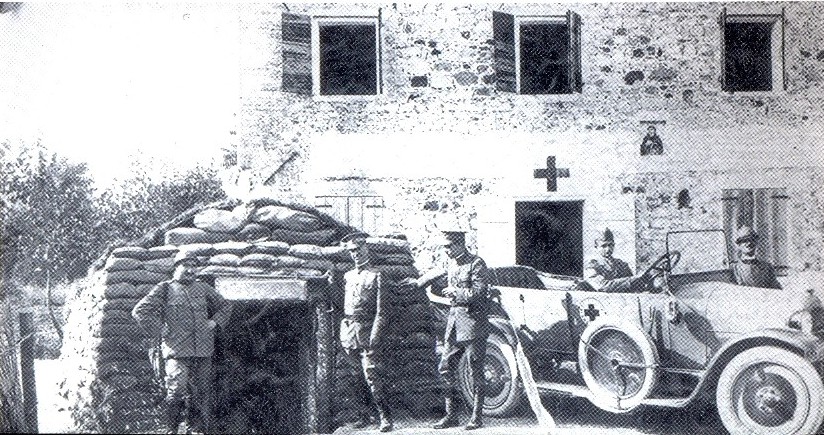 House where E.Hemingway was recovered (Photo of that time) 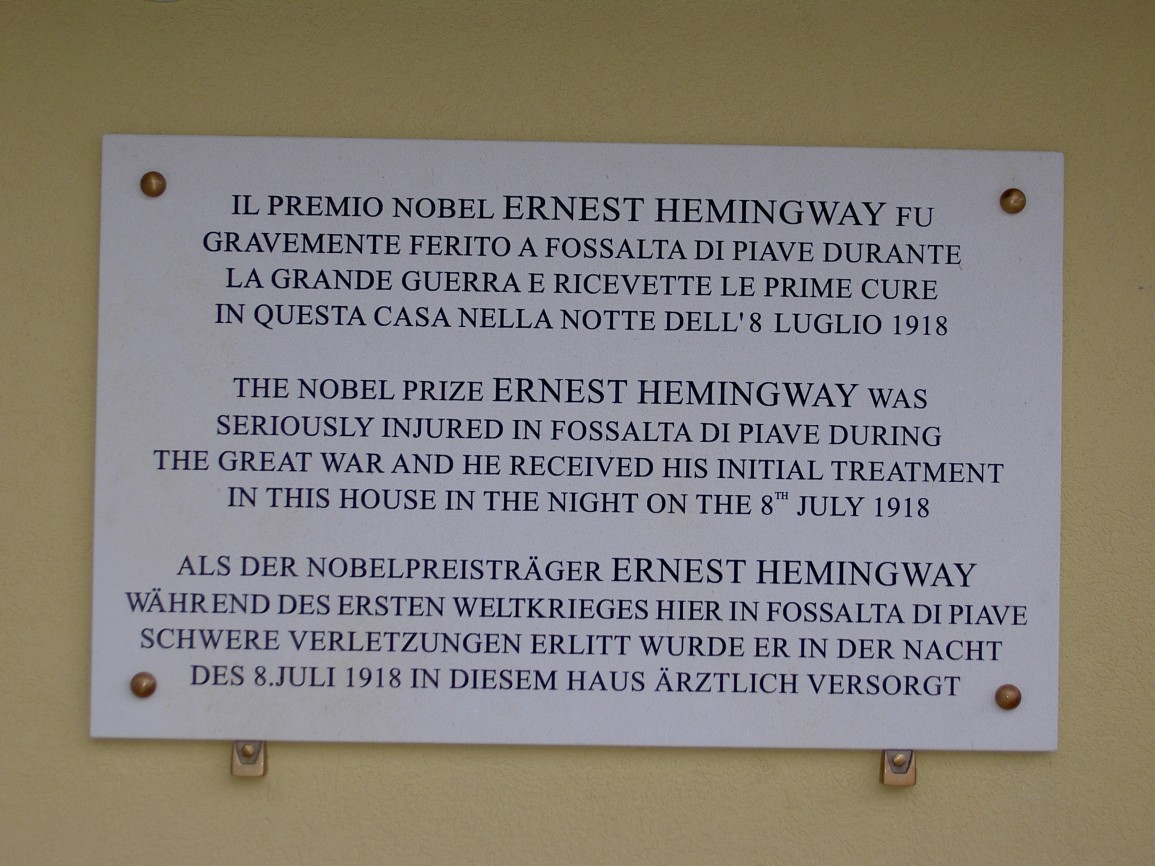 Winery Tours on Hemingway’s Tracks - Brochure
In July 1918, at the DE STEFANI winery in Fossalta di Piave, Ernest Hemingway received the first tratment after being seriously wounded during the First World War. On the tracks of Hemingway, on reservation, we propose visits to the winery and to the vineyards with tastings of wines and local typical food.